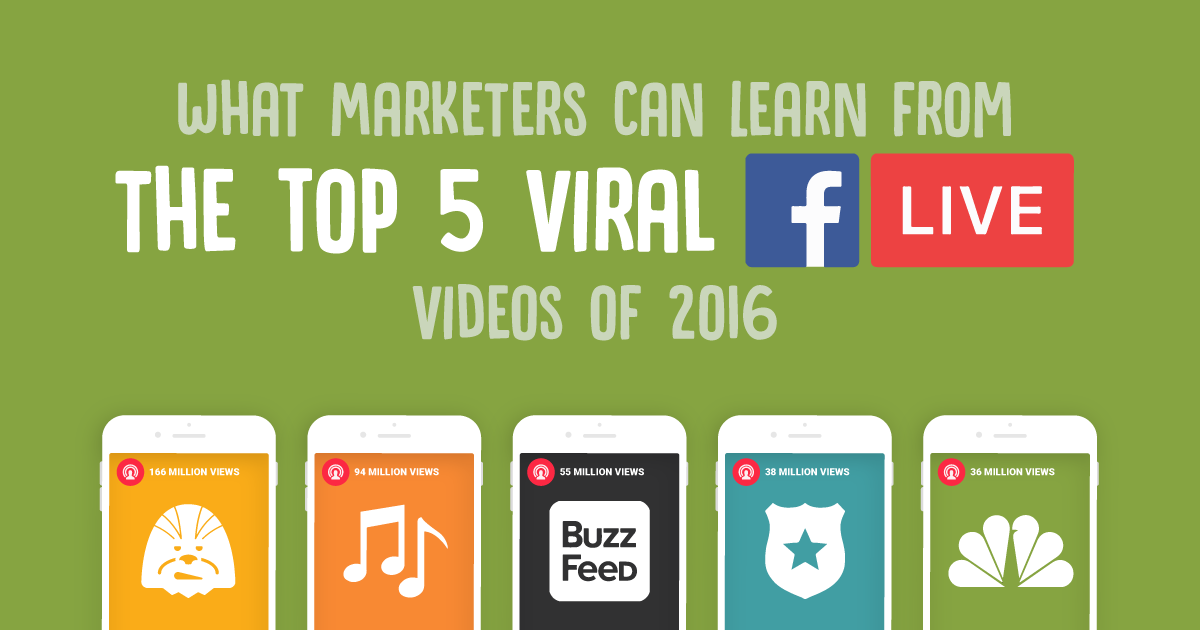 Just a little over year ago, Facebook Live went viral.

When Facebook Live initially came out in August 2015, it was limited to use by celebrities. Then in January 2016, Facebook started making the service available to all users. At first, it was mostly utilized by large media outlets.

In April 2016, BuzzFeed hosted the first Facebook Live video that went viral, which answers that burning question that keeps us all up at night: How many rubber bands does it take to make a watermelon explode? (If you need to know the answer, or just want to see a watermelon blow up, you can view the video here.)

While the exploding watermelon video garnered a respectable 11-plus million views, it was soon surpassed by Candace Payne’s “Chewbacca Mom” video in May 2016, which marked the first viral video by an everyday user. Soon, other videos followed – some silly, some serious – garnering millions of views in the U.S. and worldwide.

In honor of the first anniversary of Facebook Live going viral, let’s examine the top five viral Facebook Live videos of the past year.

In order of views, here are the top five Facebook Live videos of last year. The video in a nutshell: Sitting in her car at a Kohl’s parking lot, Candace shows off the purchase she just made: a Star Wars Chewbacca mask. She demonstrates the sound effects of the mask, which she finds absolutely hilarious, and her humor is contagious.

What we can learn: Authentic silliness is still a top driver in viral videos. Others could have demonstrated this same product and it might be interesting for about 2 seconds, but Candace’s genuine humor and her complete openness about what she’s thinking and feeling comes through so strongly that you can’t help but laugh along with her, even as your logical mind does an eye roll at the silliness of it all.

In fact, taking such a trivial thing and making it a high point of one’s day is what makes it so charming. Candace’s comment with the video says, “It’s the simple joys in life…” This pretty much sums up the appeal of this video. In a world full very serious happenings, there is a certain satisfaction in sharing the little things that make people smile.

2. Ted Yoder: Tears for Fears’ “Everybody Wants to Rule the World” on Hammered Dulcimer The video in a nutshell: Musician Ted Yoder plays the classic ‘80s Tears for Fears song “Everybody Wants to Rule the World” on hammered dulcimer, live in his backyard with family and friends looking on. If you’ve never heard of that instrument before, you’re probably not alone.

Maybe some of the appeal of the video is the novelty of the instrument, but it’s also an outstanding performance. And for the encore performance, you get to meet his family’s pet raccoon.

What we can learn: Extraordinary talent will never go out of style. Combine that with a great song, a few eclectic features – the instrument, the raccoon – and a casual, friendly vibe, and it’s easy to see why this video is a hit: It’s got several things going for it.

Like the “Chewbacca Mom” video, this oozes authenticity. This speaks to why marketers struggle to intentionally create viral videos: What elevates something from moderately interesting to worthy of being shared is often the open and authentic nature of the event, which is extremely difficult to manufacture.

3. BuzzFeed: Countdown to the 2020 Presidential Election The video in a nutshell: For those who woke up the day after the U.S. presidential election wondering, “How soon until we get a do-over?” BuzzFeed was kind enough to provide the answer in the form of a video.

The streaming video showed a (then) live countdown of the years, months, weeks, days, hours, minutes and seconds until the next presidential election.

What we can learn: Humor and empathy in a simple visual form is a powerful combination. There was a lot of talk on social media the day after about the surprising and controversial results of the election, but this video managed to say what some were feeling without saying anything. The video in a nutshell: In the wake of an ambush attack on Dallas police officers that left five dead and nine injured, citizens turned out the next day to give hugs to Dallas police officers. Yes, the event happened in Dallas, but it was Atlanta’s most-recognized news outlet that garnered the most views on Facebook Live that day.

What we can learn: When emotions are running high, simple scenes like this one can become symbolic of what millions of people are thinking and feeling. Unlike the more lighthearted videos featured previously, this video sparked more opposing viewpoints in the comments. The video in a nutshell: This 4-hour video showed a map of the U.S. and was continually updated on election night as the voting results came in.

What we can learn: Being in the right place, at the right time, with the right information matters. At the time this video aired, the election was the biggest story in the country and millions of people wanted live, up-to-the-moment information on the results. The downside, however, was that the video became irrelevant as soon as the election concluded.

Some Facebook Live Videos Have More Longevity than Others It’s interesting to note that the first three videos on this list have continued to gain millions more views over time, whereas the last two are not generating many new views.

As you can see in the graphic immediately above, here’s the viewer count of each of the aforementioned Facebook Live videos on Dec. 8, 2016, and then compared to April 27, 2017:

2) Ted Yoder: Tears for Fears’ “Everybody Wants to Rule the World” on Hammered Dulcimer: 85 million then – now 94 million

3) BuzzFeed: Countdown to the 2020 Presidential Election: 51 million then – Now 55 million

The last two videos on the list were based on events that were very relevant in the moment, but then become old news.

The funny and entertaining videos, however, continue to gain additional views as they are discovered and passed around by latecomers to the craze.

Interestingly, the “Countdown to the 2020 Presidential Election” video continues to gain views, perhaps providing an emotional outlet to those who are eager for the next presidential election. This reveals an important difference between the countdown video and the electoral college video: While the latter only gave us information we wanted in the moment, the former taps into an emotion that continues to be relevant long after the event that triggered it.

These five videos demonstrate six key traits that we see over and over again in viral videos.

While it’s extremely difficult to intentionally produce a video that goes viral, marketers can hone the skill of identifying situations and moments when an opportunity exists to share something with these traits.

Showing up every day and engaging with what people are saying, and then using those interactions to understand how they’re feeling and thinking, is what builds a marketer’s instincts for what will be popular.

But, of course, engaging online on a regular basis can be time consuming, and many businesses don’t have the resources in house to keep up with it like they should. At Eminent SEO, we manage the daily social media engagement for our clients, interacting regularly with users online, and developing strategies based on popular demand.

Learn About Our Social Media Services